Spanish Chicken in Almond Sauce (Pollo En Salsa De Almendras )…or Chicken Fricassee in Almond Sauce (Pollo En Pepitoria), as known in Botin restaurant in Madrid (founded in 1725, claim to be the “earliest” restaurant in the world) where we had first eaten this…my colour as you can see comes out much too much brighter than the original, so I am not sure whether I am still allowed to call it Fricassee…now it could be because I have no control on the saffron or because I am tired of seeing beiges and browns all around me…the husband thinks it’s the latter…proof – I have just gone ahead and bought a Neon green Jacket and an Orange handbag – colours that in my previous avatar I wouldn’t even have been caught standing next to :)…old age and lack of sunshine do make people lose their mind and you will often see/hear/read them rant about everything under the Sun or the missing Sun as the case maybe instead of getting to the point…and the point was…errr…

Get the chicken to room temperature and pat dry with paper towels.

Salt and pepper all sides of the chicken pieces.

Heat about 1 tbsp of oil in a large heavy bottom pan/skillet or Dutch oven. Once the oil is hot, fry the chicken over medium high heat in batches until pale golden on both sides. Transfer to a plate and keep aside. If using skin on chicken – place the chicken in the pan skin side down first. The skin will also release some extra oil while frying that you may need to remove before proceeding.

Add in the onions to the same pan and fry till the onions just start to turn slightly golden at the edges.

Pour in the wine and scrape up any browned bits at the bottom of the pan. Let it bubble and simmer until the wine is reduced by half.

Return the chicken to the pan (skin side up if using skin on chicken pieces), along with any juices that have accumulated on the plate.

Add in the bayleaf and chicken stock. Bring to a boil, then reduce the heat to a simmer. Cover and cook, stirring occasionally, until the chicken is cooked half way through – about 20 minutes.

Heat a small frying pan on low heat and lightly roast the saffron threads for about 15 to 20 seconds. Remove and keep aside.

Blend the egg yolk, garlic, almonds/ground almonds, garlic and bread in a food processor and a little chicken stock (from the simmering chicken pot) until you have a thick paste.

Stir this almond paste into the chicken pot with the saffron threads. 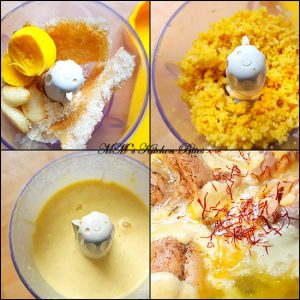 Let the chicken continue to simmer, uncovered, stirring frequently until the sauce has thickened and the chicken is cooked through and falling off the bone – about 20-25 minutes.

Taste and adjust the seasoning to your liking.

Remove the chicken to the serving dish and top with the grated egg white. Serve with rice and/or potatoes 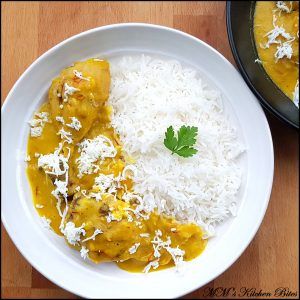 To make a low calorie version 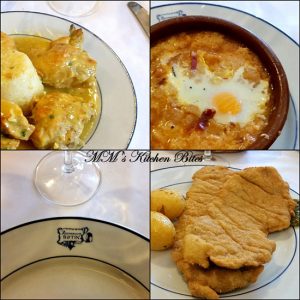 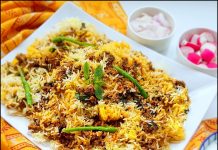 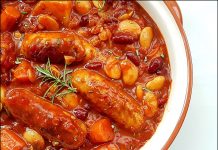 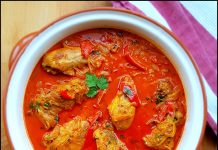